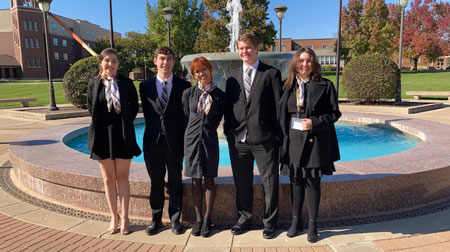 With an impressive performance in regional competition, OU’s Ethics Bowl team recently earned a spot at a national tournament to be held in February. The team went undefeated at the Central States Regional Ethics Bowl Competition on November 6, placing third by points in a field of 18 teams from 10 schools.

The team began preparing for the competition in early September, meeting twice a week to discuss cases and hold mock rounds similar to those in competition. They prepared a total of nine cases for the competition, not knowing which ones would be selected for the competition. Teams are awarded points based on the breadth and quality of their arguments, as well as their ability to respond to opposing viewpoints, a process known as commentating in ethics bowl parlance.

“Ethics bowl teaches us how to think smart and think on our feet,” said team president Erika Luft, a junior majoring in nursing. “When you're a presenter, you really have to be able to anticipate any arguments and potential holes in your case before they can be pointed out by the opposing team, and be able to see your case from many different lenses of thought. When you're a commentator, you have to be able to think critically and analyze the counter arguments in a timed situation. We also have to learn the basics of many different ethical theories, along with good written and oral communication skills.”

OU’s Ethics Bowl team is hosted by the Department of Philosophy and receives generous support from many offices across the university. This year marks the seventh time they have earned a berth in national competition.

“I and the rest of my team are so happy that our hard work got us this far. We all know we've got a tough road ahead in preparing for nationals now, with a whole new set of cases, but it's so worth it for all of us.” Luft said. “We're also really excited to be getting to spend more time together as we are a close-knit team, and getting to travel to a new city and just be a part of the competition is a reward in itself.”

“Ethics Bowl is a fun, yet challenging activity that has prepared many members of our team for careers in law, medicine, academics and business,” said OU Ethics Bowl Coach Lisa Campbell, special lecturer in Communication and Philosophy. “We welcome all majors because, especially today, learning to think critically and examine the world around us is what this country needs in its leaders.”